Modeling exponential decay quickly without doing too much math computation is the goal of this lesson.

In our previous lesson about what is exponential decay we modeled the following problem shown in bold with y = 100,000(0.97)x

Just like we did it for exponential growth, we will show that there is an easier and quicker way to get the same answer.

The only trick is to see that 100% - 3% = 97% = 0.97 instead of doing the complicated math computation in the lesson referenced above. Using the decay factor, you can just model the problem as shown below.

The value of new car decreases exponentially. Suppose you buy a new car for 45,000 dollars. It is said that the value of a new car will decrease by 20% each year. Model the value of your car with an exponential function x years after you bought it.

The half-life of a radioactive substance is the length of time it takes for one half of the substance to decay into another substance. The half-life of iodine-125 is about 59 days and it can be used to treat some forms of tumors. Suppose a patient receives a 20-mCi (millicuries, a measure of radiation) treatment. How much iodine-125 is left in the patient 177 days after?

The important thing to understand here is half-life is 59 days. It means that the substance will lose half of its original amount or decay by 50% every 59 days.

There will be 2.5 millicuries left in the patient. 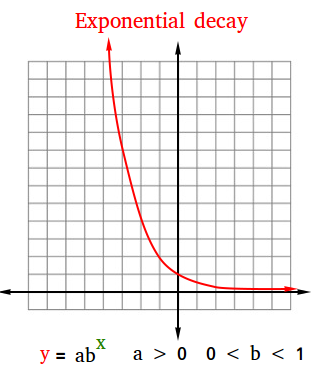