Modeling exponential growth quickly without doing too much math computation is what this lesson will show you.

In our previous lesson about what is exponential growth we modeled the following problem with y = 16,000,000(1.02)x

However, there is an easier and quicker way to get the same answer.

The only trick is to see that 100% + 2% = 102% = 1.02 instead of doing the complicated math computation in the lesson referenced above. Once you identify the growth factor, you can just model the problem as shown below.

Suppose that the cost of caring for patients in community hospitals has been increasing about 4% each year since 1996. If the cost was 998 dollars in 1996, model the cost of care since 1996 with an exponential function.

Suppose you deposit 4000 dollars in a saving account paying 1.5% interest compounded annually or once per year on January 1, 1998. Model in years the amount of money you have in the saving account since 1998.

Suppose instead that the interest was compounded quarterly instead of annually.

Find a model for this situation.

x cannot be the number of years since 1998 anymore since interest is computed now every 3 months.

Let y be the amount of money in the saving account for various times.

Notice that we divide the interest into 4 parts since there are 4 interest periods in a year. 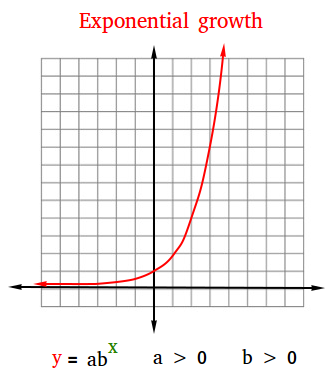