Linear equations are all equations that have the following form: y = ax + b, a and b are real numbers and are called constants. 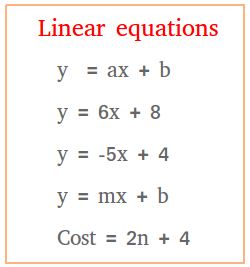 Notice that all linear equations are equations of degree 1, meaning that the variable cannot be raised to a power other than 1. If the power of the equation is not 1, you are dealing with non-linear equations.

The term that is raised to a power other than 1 is xy. This term can also give us the degree of this equation. Just add the exponents for each variable to get the degree. Therefore the degree is 2 since xy = x1y1

Here are the three major forms of linear equations

Slope-intercept form of a linear equation

The name "slope-intercept form" came from the fact that you can clearly and quickly identify the slope and the y-intercept in the equation. This can help to quickly graph the line of the equation.

Point-slope form of a linear equation

The name "point-slope form" also came from the fact that you can clearly and quickly identify the slope and a point just by looking at the equation. This can help you quickly graph the line of the equation. You do this by putting the point first on the coordinate plane. Then, use the slope to find one more point. Finally draw a straight line between the two points. See how this is done in the lesson about graphing slope.

General form of a linear equation

The name "general form" most likely came from the fact that you cannot quickly identify anything specific in the equation such as the slope. However, the general form can be used to quickly find the x-intercept and the y-intercept.

The standard form of linear equations with two variables can be written as Ax + By = C where A, B, and C are real numbers and A and B are not both zero.

An equation of the form Ax = C or By = C is called linear equation with one variable. A and B cannot be zeros.

An interesting math problem leading to a linear equation

I am thinking of a number. If I add 2 to that number, I will get 5. What is the number?

Although it may be fairly easy to guess that the number is 3, you can model the situation above with a linear equation.

Let x be the number in my mind.

A real-life example leading to a linear equation

Soon or later, we need the service of a taxi driver. Taxi drivers usually charge an initial fixed fee as part of using their services. Then, for each mileage, they charge a certain amount.

Say for instance the initial fee is 4 dollars and each mileage cost 2 dollars.

The total cost can be modeled with an equation that is linear.

Let y be the total cost.

Let n be number of mileage.

Now, let's ask the question the other way around!

If you pay 60 dollars, how far did the taxi driver took you?

Replacing 60 into the equation gives you the following equation:

That is why it is important to learn to solve linear equations!

How to graph linear equations