What is a circle? Definition and examples

What is a circle? In geometry, a circle is the locus of points located at the same distance from a given fixed point.

The word locus sounds complicated, but it means set of all points on a plane. The fixed point is called center of the circle.

Another way then to define a circle is to say that it is the set of all points that are located at the same distance from a fixed point.

Looking at the figure below, all the blue dots are located at the distance from the red dot (fixed point or center of the circle) and they form the locus of points mentioned above. 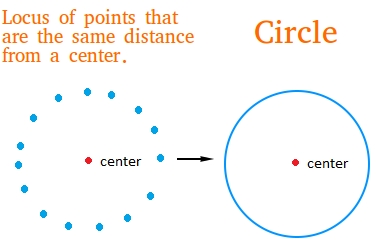 You can put a great number of blue dots until you get a closed curved line figure.The figure above shows a circle resulting from connecting the locus of all the points equidistant from the center.


What is a circle and how to name the lines that cut a circle?

Lines on a circle are given different names depending on how the line cuts the circle. There are five such lines.

A line segment joining two points on the circle is a chord. The following are examples of two chords.

When a chord passes through the center, we call the chord a diameter. A diameter usually divides a circle into two equal halves and each half is called a semi-circle.

Half a diameter is called a radius. In other words, 2 radii = diameter as long as we are dealing with the same circle. The radius of a circle can also be defined as the distance between the center of the circle and any point on the circle.

A secant is a line that intersects a circle at two points. A secant of a circle is shown in blue below.

Did you see the difference between the secant and the other lines, especially the chord? The secant is not contained within the circle. It is extended beyond the loci.

The tangent of a circle is shown in red. It is a line that touches the circle in exactly one point.

Definition of a circle quiz. How well do you know basic facts about a circle?

How to find the number pi